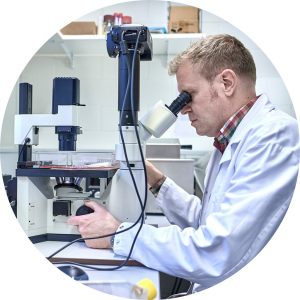 The Ubern team is primarily contributing to intervertebral disc (IVD) cells that were isolated with written consent from patients undergoing spinal surgery. These cells were collected from peripheral blood and from the removed IVD tissue during discectomy surgery. Dr. Julien Guerrero, the post-doctoral researcher in my team, ensured that these cell isolations could be performed with the necessary quality controls and also could be delivered on time. These cells were then the basis to derive induced the pluripotent stem cells (iPSCs) for the project. This next important step in the overall series of working packages is now in progress in the team of Jean-Marc Le Maitre and Romain Desprait at the INSERM in Montpellier. My team and Marianna Tryfonidou, the consortium leader, have been focusing on how to isolate and characterize a relatively recently detected tissue-specific progenitor cell population in the center of the IVD. These cells, which were firstly described by Prof. Dai Sakai and his team from Japan, are multipotent and can form colony-forming units (CFUs), and are positive for a typical endothelial-derived surface marker, angiopoietin receptor 1 (Tie2). The latter is also very unusual for the IVD as it originates from the notochord, which gives the structure to embryonic bodies. However, these Tie2+ cells are relatively rare in the IVD (1-5%) but also decrease rapidly with age. A sub-aim was to compare donor-matched iPSC derived from these Tie2+ cells with mononuclear cells in the peripheral blood. Due to the close collaboration with the clinicians, we were able to deliver primary cells from spinal trauma surgery with ethical approval to the specialists at INSERM that generated the iPSCs.

How does it feel to be working in such a large consortium?

It is a really great experience. It is a unique opportunity to interact with various experts from the life sciences and biomedical engineering field, from bio-materialists over engineers to orthopedic surgeons and veterinarians, company, and regulatory affairs experts. This makes the project ultimately interesting but also challenging. The format to contribute to the community on such an important question and to improve the patient’s treatment options in the main matter of low back pain (LBP) with potential cell therapy treatment is highly relevant. LBP is beside the current COVID19 pandemic a worldwide “sleeping pandemic” that affects many people aged from 25-80+ people worldwide. LBP is recognized as one of four major burdens worldwide besides stroke and cardiac diseases. This motivates my broader research aims and to find better solutions than static metal implants that not take into account the biology and the natural biomechanics of the spine.

What do you think is unique about being part of the iPSpine project?

The iPSpine project represents an important milestone to fight low back pain. It provides a platform to shade light from various angles onto the “science fiction” to find a “cure” for degenerated discs. We do not know whether this will be achieved at the end of this project. However, I am pretty sure that our understanding of the precise requirements of cell therapy, identifying the most suitable cell source, and best suitable biomaterials for such iPSCs for the specific application for the regeneration of the IVD will be much better understood than today. Here, the understanding of the microenvironment of the IVD niche could lead the way to “prime” iPSCs or other progenitor cells before injection to improve the outcome by better cell survival.

This website uses cookies to improve your experience while you navigate through the website. Out of these, the cookies that are categorized as necessary are stored on your browser as they are essential for the working of basic functionalities of the website. We also use third-party cookies that help us analyze and understand how you use this website. These cookies will be stored in your browser only with your consent. You also have the option to opt-out of these cookies. But opting out of some of these cookies may affect your browsing experience.
Necessary Always Enabled
Necessary cookies are absolutely essential for the website to function properly. This category only includes cookies that ensures basic functionalities and security features of the website. These cookies do not store any personal information.
Non-necessary
Any cookies that may not be particularly necessary for the website to function and is used specifically to collect user personal data via analytics, ads, other embedded contents are termed as non-necessary cookies. It is mandatory to procure user consent prior to running these cookies on your website.
Functional
Functional cookies help to perform certain functionalities like sharing the content of the website on social media platforms, collect feedbacks, and other third-party features.
Performance
Performance cookies are used to understand and analyze the key performance indexes of the website which helps in delivering a better user experience for the visitors.
Analytics
Analytical cookies are used to understand how visitors interact with the website. These cookies help provide information on metrics the number of visitors, bounce rate, traffic source, etc.
Advertisement
Advertisement cookies are used to provide visitors with relevant ads and marketing campaigns. These cookies track visitors across websites and collect information to provide customized ads.
Others
Other uncategorized cookies are those that are being analyzed and have not been classified into a category as yet.
SAVE & ACCEPT
Powered by