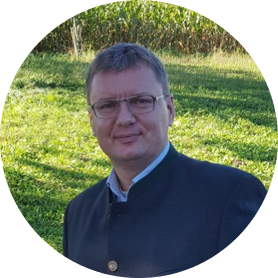 On several occasions, I was caught in the middle of a movement, like getting up from a seat, and could not get either further up or back into the seated position.

Usually being a sportsman, like being into martial arts (Karate and Aikido), cycling and playing American Football semi-professionally (Linz Steelers, Austria), I had a huge backdraft as in 2008 I after a CT screening due my persistent lower back pain and ever more the inability to train it turned out, I have a disc prolapse. This, my doctor wanted to treat conservatively. Subsequently, despite the reoccurring efforts, due to the increase in pain, my training activities, or even any kind of movement were more and more restricted. On several occasions, I was caught in the middle of a movement, like getting up from a seat, and could not get either further up or back into the seating position.
Around 2015, I was treated with a painkiller depot medicine (under CT) and since then, the pain, but also the bulge of the prolapse were vanishing, but that CT also indicated, that my spine vertebrae are sliding. Since 2018, however, I feel and hear it, and CT pictures shows it, the vertebrae are in such angle to each other that bone material is rubbing on each other without a disc in between.
As, up to date, doctors have always recommended me a conservative therapy, I was surprised as in 2019, due to a treatment of a feet injury (tried playing tennis again😊), a doctor told me, that as regarding my lower back problems, if I had want to do something else (operation, etc.), it is too late for that now and I should have done somethings years ago. In an earlier stage, I could get good results with other (he did not explain me which) treatments and now, there is only the possibility of fixating the two vertebrae bones together.
I do not have to mention, that since approximately 2007 up to 2010 I gained 35kg weight and today I am about 25kg over the weight I had back in 2007. My job, office work par excellence, was not helpful in both, neither to reduce weight nor optimize the load on my spine, due to long working hours and travelling.

Today, I am seeking for a therapy/treatment to regain my ability for having an active life in a less restricted manner and I wish that no one must take the journey like I did.

This website uses cookies to improve your experience while you navigate through the website. Out of these, the cookies that are categorized as necessary are stored on your browser as they are essential for the working of basic functionalities of the website. We also use third-party cookies that help us analyze and understand how you use this website. These cookies will be stored in your browser only with your consent. You also have the option to opt-out of these cookies. But opting out of some of these cookies may affect your browsing experience.
Necessary Always Enabled
Necessary cookies are absolutely essential for the website to function properly. This category only includes cookies that ensures basic functionalities and security features of the website. These cookies do not store any personal information.
Non-necessary
Any cookies that may not be particularly necessary for the website to function and is used specifically to collect user personal data via analytics, ads, other embedded contents are termed as non-necessary cookies. It is mandatory to procure user consent prior to running these cookies on your website.
Functional
Functional cookies help to perform certain functionalities like sharing the content of the website on social media platforms, collect feedbacks, and other third-party features.
Performance
Performance cookies are used to understand and analyze the key performance indexes of the website which helps in delivering a better user experience for the visitors.
Analytics
Analytical cookies are used to understand how visitors interact with the website. These cookies help provide information on metrics the number of visitors, bounce rate, traffic source, etc.
Advertisement
Advertisement cookies are used to provide visitors with relevant ads and marketing campaigns. These cookies track visitors across websites and collect information to provide customized ads.
Others
Other uncategorized cookies are those that are being analyzed and have not been classified into a category as yet.
SAVE & ACCEPT
Powered by